Alzheimer’s and Hallucinations, Delusions, and Paranoia 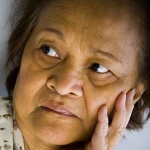 Alzheimer’s and Hallucinations, Delusions, and Paranoia

Due to complex changes occurring in the brain, people with Alzheimer’s disease may see or hear things that have no basis in reality.

If a person with Alzheimer’s has ongoing disturbing hallucinations or delusions, seek medical help. An illness or medication may cause these behaviors. Medicines are available to treat these behaviors but must be used with caution. The following tips may also help you cope with these behaviors.

Here are some tips for coping with hallucinations and delusions:

In a person with Alzheimer’s disease, paranoia often is linked to memory loss. It can become worse as memory loss gets worse. For example, the person may become paranoid if he or she forgets:

Paranoia may be the person’s way of expressing loss. The person may blame or accuse others because no other explanation seems to make sense.

Here are some tips for coping with paranoia:

Also, keep in mind that someone with Alzheimer’s disease may have a good reason for acting a certain way. He or she may not be paranoid. There are people who take advantage of weak and elderly people. Find out if someone is trying to abuse or steal from the person with Alzheimer’s. For more information, visit Elder Abuse.