How Is Alzheimer’s Disease Diagnosed? 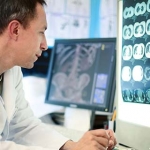 How is Alzheimer’s Disease Diagnosed?

To diagnose Alzheimer’s, doctors may:

These tests may be repeated to give doctors information about how the person’s memory and other cognitive functions are changing over time. They can also help diagnose other causes of memory problems, such as stroke, tumor, Parkinson’s disease, sleep disturbances, side effects of medication, an infection, mild cognitive impairment, or a non-Alzheimer’s dementia, including vascular dementia. Some of these conditions may be treatable and possibly reversible.

People with memory problems should return to the doctor every six to 12 months.

It’s important to note that Alzheimer’s disease can be definitively diagnosed only after death, by linking clinical measures with an examination of brain tissue in an autopsy. Occasionally, biomarkers — measures of what is happening inside the living body — are used to diagnose Alzheimer’s.

If a primary care doctor suspects mild cognitive impairment or possible Alzheimer’s, he or she may refer the patient to a specialist who can provide a detailed diagnosis or further assessment. Specialists include:

Memory clinics and centers, including Alzheimer’s Disease Research Centers, offer teams of specialists who work together to diagnose the problem. Tests often are done at the clinic or center, which can speed up diagnosis.

What are the Benefits of Early Diagnosis?

Early, accurate diagnosis is beneficial for several reasons. Beginning treatment early in the disease process may help preserve daily functioning for some time, even though the underlying Alzheimer’s process cannot be stopped or reversed.

Having an early diagnosis helps people with Alzheimer’s and their families:

In addition, an early diagnosis gives people greater opportunities to participate in clinical trials that are testing possible new treatments for Alzheimer’s disease or in other research studies.