What are the Symptoms of Frontotemporal Disorders? 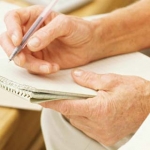 What are the Symptoms of Frontotemporal Disorders?

Symptoms are often misunderstood. Family members and friends may think that a person is misbehaving, leading to anger and conflict. For example, a person with bvFTD may neglect personal hygiene or start shoplifting. It is important to understand that people with these disorders cannot control their behaviors and other symptoms. Moreover, they lack any awareness of their illness, making it difficult to get help.

People with PPA may have only problems using and understanding words or also problems with the physical ability to speak. People with both kinds of problems have trouble speaking and writing. They may become mute, or unable to speak. Language problems usually get worse, while other thinking and social skills may remain normal longer before deteriorating.

Previously a devoted husband, Gary began an extramarital affair at age 55—and didn’t care that everyone knew about it. His wife was devastated and angry. His friends agreed that this was not like him. All attempts to reason with him were unsuccessful, as Gary could not understand how his actions hurt others. His wife insisted on a visit to the doctor. Initially, Gary was misdiagnosed with bipolar disorder. After further evaluation, he was told he had bvFTD.