What are the Different Types of Frontotemporal Disorders? 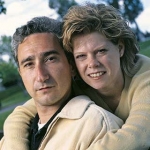 What are the Different Types of Frontotemporal Disorders?

In the early stages, it can be hard to know which type of frontotemporal disorder a person has because symptoms and the order in which they appear can vary widely from one person to the next. Also, the same symptoms can appear in different disorders. For example, language problems are most typical of primary progressive aphasia but can also appear later in the course of behavioral variant frontotemporal dementia.

The most common frontotemporal disorder, behavioral variant frontotemporal dementia (bvFTD), involves changes in personality, behavior, and judgment. People with this dementia may have problems with cognition, but their memory may stay relatively intact. They can act strangely around other people, resulting in embarrassing social situations. Often, they don’t know or care that their behavior is unusual and don’t show any consideration for the feelings of others. They may also do impulsive things that are out of character or engage in repetitive behaviors. Over time, language and/or movement problems may occur, and the person needs more care and supervision.

In the past, bvFTD was called Pick’s disease, named after Arnold Pick, the German scientist who first described it in 1892. The term Pick’s disease is now used to describe abnormal collections in the brain of the protein tau, called “Pick bodies.” Some patients with bvFTD and primary progressive aphasia (see below) have Pick bodies in the brain, and some do not.

Alicia’s first symptom was trouble talking. She spoke more slowly and thought she sounded stilted. She could understand people well enough, but finding the right words when she was talking became harder and harder. Also, Alicia, 49, could not write words like “and” and “it” but could write words like “alligator.” Her doctor recommended a neurological exam, which helped diagnose agrammatic PPA.

What is Primary Progressive Aphasia?

Primary progressive aphasia (PPA) involves changes in the ability to communicate—to use language to speak, read, write, and understand what others are saying. Problems with memory, reasoning, and judgment are not apparent at first but can develop over time. In addition, some people with PPA may experience significant behavioral changes, similar to those seen in bvFTD, as the disease progresses.

In semantic PPA, also called semantic dementia, a person slowly loses the ability to understand single words and sometimes to recognize the faces of familiar people and common objects.

In agrammatic PPA, also called progressive nonfluent aphasia, a person has more and more trouble producing speech. Eventually, the person may no longer be able to speak at all. He or she may eventually develop movement symptoms similar to those seen in corticobasal syndrome.

In logopenic PPA, a person has trouble finding the right words during conversation but can understand words and sentences. The person does not have problems with grammar.

Two rare neurological disorders associated with FTLD, corticobasal syndrome (CBS) and progressive supranuclear palsy (PSP), occur when the parts of the brain that control movement are affected. The disorders may affect thinking and language abilities, too.

CBS can be caused by corticobasal degeneration—gradual atrophy and loss of nerve cells in specific parts of the brain. This degeneration causes progressive loss of the ability to control movement, typically beginning around age 60. The most prominent symptom may be the inability to use the hands or arms to perform a movement despite normal strength (called apraxia). Symptoms may appear first on one side of the body, but eventually both sides are affected. Occasionally, a person with CBS first has language problems or trouble orienting objects in space and later develops movement symptoms. Not everyone who has CBS has problems with memory, cognition, language, or behavior.

PSP causes problems with balance and walking. People with the disorder typically move slowly, experience unexplained falls, lose facial expression, and have body stiffness, especially in the neck and upper body—symptoms similar to those of Parkinson’s disease. A hallmark sign of PSP is trouble with eye movements, particularly looking down. These symptoms may give the face a fixed stare. Problems with behavior, memory, problem solving, and judgment can also develop.

Frontotemporal dementia with parkinsonism can be an inherited disease caused by a genetic tau mutation. Symptoms include movement problems similar to those of Parkinson’s disease, such as slowed movement, stiffness, and balance problems, and changes in behavior or language.

FTD-ALS, also called FTD with motor neuron disease, is a combination of bvFTD and ALS, commonly known as Lou Gehrig’s disease. Symptoms include the behavioral and/or language changes seen in bvFTD as well as the progressive muscle weakness seen in ALS. Symptoms of either disease may appear first, with other symptoms developing over time. Mutations in certain genes have been found in some patients with FTD-ALS, though most cases are not hereditary.

For a year and a half, John had trouble walking and fell several times. He also had trouble concentrating. He couldn’t read because the words merged together on the page. John, 73, also seemed less interested in social activities and projects around the house. His wife noticed that he was more irritable than usual and sometimes said uncharacteristically inappropriate things. John’s primary care doctor did several tests, then referred him to a neurologist, who noted abnormalities in his eye movements and diagnosed PSP.