What Happens to the Brain in Alzheimer’s Disease? 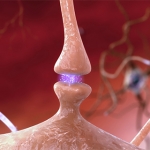 What Happens to the Brain in Alzheimer’s Disease?

The healthy human brain contains tens of billions of neurons—specialized cells that process and transmit information via electrical and chemical signals. They send messages between different parts of the brain, and from the brain to the muscles and organs of the body. Alzheimer’s disease disrupts this communication among neurons, resulting in loss of function and cell death.

Key Biological Processes in the Brain

Most neurons have three basic parts: a cell body, multiple dendrites, and an axon.

The function and survival of neurons depend on several key biological processes:

Neurons are a major player in the central nervous system, but other cell types are also key to healthy brain function. In fact, glial cells are by far the most numerous cells in the brain, outnumbering neurons by about 10 to 1. These cells, which come in various forms—such as microglia, astrocytes, and oligodendrocytes—surround and support the function and healthy of neurons. For example, microglia protect neurons from physical and chemical damage and are responsible for clearing foreign substances and cellular debris from the brain. To carry out these functions, glial cells often collaborate with blood vessels in the brain. Together, glial and blood vessel cells regulate the delicate balance within the brain to ensure that it functions at its best.

How Does Alzheimer’s Disease Affect the Brain?

The brain typically shrinks to some degree in healthy aging but, surprisingly, does not lose neurons in large numbers. In Alzheimer’s disease, however, damage is widespread, as many neurons stop functioning, lose connections with other neurons, and die. Alzheimer’s disrupts processes vital to neurons and their networks, including communication, metabolism, and repair.

At first, Alzheimer’s disease typically destroys neurons and their connections in parts of the brain involved in memory, including the entorhinal cortex and hippocampus. It later affects areas in the cerebral cortex responsible for language, reasoning, and social behavior. Eventually, many other areas of the brain are damaged. Over time, a person with Alzheimer’s gradually loses his or her ability to live and function independently. Ultimately, the disease is fatal.

What Are the Main Characteristics of the Brain with Alzheimer’s?

Many molecular and cellular changes take place in the brain of a person with Alzheimer’s disease. These changes can be observed in brain tissue under the microscope after death. Investigations are underway to determine which changes may cause Alzheimer’s and which may be a result of the disease.

The beta-amyloid protein involved in Alzheimer’s comes in several different molecular forms that collect between neurons. It is formed from the breakdown of a larger protein, called amyloid precursor protein. One form, beta-amyloid 42, is thought to be especially toxic. In the Alzheimer’s brain, abnormal levels of this naturally occurring protein clump together to form plaques that collect between neurons and disrupt cell function. Research is ongoing to better understand how, and at what stage of the disease, the various forms of beta-amyloid influence Alzheimer’s.

Neurofibrillary tangles are abnormal accumulations of a protein called tau that collect inside neurons. Healthy neurons, in part, are supported internally by structures called microtubules, which help guide nutrients and molecules from the cell body to the axon and dendrites. In healthy neurons, tau normally binds to and stabilizes microtubules. In Alzheimer’s disease, however, abnormal chemical changes cause tau to detach from microtubules and stick to other tau molecules, forming threads that eventually join to form tangles inside neurons. These tangles block the neuron’s transport system, which harms the synaptic communication between neurons.

Emerging evidence suggests that Alzheimer’s-related brain changes may result from a complex interplay among abnormal tau and beta-amyloid proteins and several other factors. It appears that abnormal tau accumulates in specific brain regions involved in memory. Beta-amyloid clumps into plaques between neurons. As the level of beta-amyloid reaches a tipping point, there is a rapid spread of tau throughout the brain.

Research suggests that chronic inflammation may be caused by the buildup of glial cells normally meant to help keep the brain free of debris. One type of glial cell, microglia, engulfs and destroys waste and toxins in a healthy brain. In Alzheimer’s, microglia fail to clear away waste, debris, and protein collections, including beta-amyloid plaques. Researchers are trying to find out why microglia fail to perform this vital function in Alzheimer’s.

One focus of study is a gene called TREM2. Normally, TREM2 tells the microglia cells to clear beta-amyloid plaques from the brain and helps fight inflammation in the brain. In the brains of people where this gene does not function normally, plaques build up between neurons. Astrocytes—another type of glial cell—are signaled to help clear the buildup of plaques and other cellular debris left behind. These microglia and astrocytes collect around the neurons but fail to perform their debris-clearing function. In addition, they release chemicals that cause chronic inflammation and further damage the neurons they are meant to protect.

People with dementia seldom have only Alzheimer’s-related changes in their brains. Any number of vascular issues—problems that affect blood vessels, such as beta-amyloid deposits in brain arteries, atherosclerosis (hardening of the arteries), and mini-strokes—may also be at play.

Vascular problems may lead to reduced blood flow and oxygen to the brain, as well as a breakdown of the blood-brain barrier, which usually protects the brain from harmful agents while allowing in glucose and other necessary factors. In a person with Alzheimer’s, a faulty blood-brain barrier prevents glucose from reaching the brain and prevents the clearing away of toxic beta-amyloid and tau proteins. This results in inflammation, which adds to vascular problems in the brain. Because it appears that Alzheimer’s is both a cause and consequence of vascular problems in the brain, researchers are seeking interventions to disrupt this complicated and destructive cycle.

In Alzheimer’s disease, as neurons are injured and die throughout the brain, connections between networks of neurons may break down, and many brain regions begin to shrink. By the final stages of Alzheimer’s, this process—called brain atrophy—is widespread, causing significant loss of brain volume.