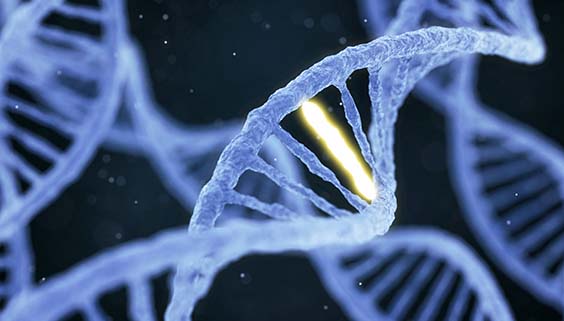 Scientists believe that many factors influence when Alzheimer’s disease begins and how it progresses. The more they study this devastating disease, the more they realize that genes play an important role. Research conducted and funded by the National Institute on Aging (NIA) at the National Institutes of Health (NIH) and others is advancing our understanding of Alzheimer’s disease genetics.

The Genetics of Disease

Some diseases are caused by a genetic mutation, or permanent change in one or more specific genes. If a person inherits from a parent a genetic mutation that causes a certain disease, then he or she will usually get the disease. Sickle cell anemia, cystic fibrosis, and early-onset familial Alzheimer’s disease are examples of inherited genetic disorders.

Identifying genetic variants may help researchers find the most effective ways to treat or prevent diseases such as Alzheimer’s in an individual. This approach, called precision medicine, takes into account individual variability in genes, environment, and lifestyle for each person.

Alzheimer’s disease is an irreversible, progressive brain disease. It is characterized by the development of amyloid plaques and neurofibrillary, or tau, tangles; the loss of connections between nerve cells (neurons) in the brain; and the death of these nerve cells. There are two types of Alzheimer’s—early-onset and late-onset. Both types have a genetic component.

What Are DNA, Chromosomes, and Genes?

The nucleus of almost every human cell contains a “blueprint” that carries the instructions a cell needs to do its job. The blueprint is made up of DNA (deoxyribonucleic acid), which is present in long strands that would stretch to nearly 6 feet in length if attached end to end. The DNA is packed tightly together with proteins into compact structures called chromosomes. Normally, each cell has 46 chromosomes in 23 pairs, which are inherited equally from a person’s biological parents. The DNA in nearly all cells of an individual is identical.

Each chromosome contains many thousands of segments, called genes. People inherit two copies of each gene from their parents, except for genes on the X and Y chromosomes, which, among other functions, determine a person’s sex. The genes “instruct” the cell to make unique proteins that, in turn, dictate the types of cells made. Genes also direct almost every aspect of the cell’s construction, operation, and repair.

Even slight changes in a gene can produce a protein that functions abnormally, which may lead to disease. Other changes in genes may increase or decrease a person’s risk of developing a particular disease.

A child whose biological mother or father carries a genetic mutation for early-onset FAD has a 50/50 chance of inheriting that mutation. If the mutation is in fact inherited, the child has a very strong probability of developing early-onset FAD.

Each of these mutations plays a role in the breakdown of APP, a protein whose precise function is not yet fully understood. This breakdown is part of a process that generates harmful forms of amyloid plaques, a hallmark of the disease.

Critical research findings about early-onset Alzheimer’s have helped identify key steps in the formation of brain abnormalities typical of the more common late-onset form of Alzheimer’s. Genetics studies have helped explain why the disease develops in people at various ages.

NIA-supported scientists are continuing research into early-onset disease through the Dominantly Inherited Alzheimer Network (DIAN), an international partnership to study families with early-onset FAD. By observing the Alzheimer’s-related brain changes that occur in these families long before symptoms of memory loss or cognitive issues appear, scientists hope to gain insight into how and why the disease develops in both its early- and late-onset forms.

Most people with Alzheimer’s have the late-onset form of the disease, in which symptoms become apparent in the mid-60s and later. The causes of late-onset Alzheimer’s are not yet completely understood, but they likely include a combination of genetic, environmental, and lifestyle factors that affect a person’s risk for developing the disease.

Researchers have not found a specific gene that directly causes the late-onset form of the disease. However, one genetic risk factor—having one form of the apolipoprotein E (APOE) gene on chromosome 19—does increase a person’s risk. APOE comes in several different forms, or alleles:

Using a relatively new approach called genome-wide association study (GWAS), researchers have identified a number of regions of interest in the genome (an organism’s complete set of DNA, including all of its genes) that may increase a person’s risk for late-onset Alzheimer’s to varying degrees. By 2015, they had confirmed 33 regions of interest in the Alzheimer’s genome.

A method called whole genome sequencing determines the complete DNA sequence of a person’s genome at a single time. Another method called whole exome sequencing looks at the parts of the genome that directly code for the proteins. Using these two approaches, researchers can identify new genes that contribute to or protect against disease risk. Recent discoveries have led to new insights about biological pathways involved in Alzheimer’s and may one day lead to effective interventions.

A blood test can identify which APOE alleles a person has, but results cannot predict who will or will not develop Alzheimer’s disease. It is unlikely that genetic testing will ever be able to predict the disease with 100 percent accuracy, researchers believe, because too many other factors may influence its development and progression.

Currently, APOE testing is used in research settings to identify study participants who may have an increased risk of developing Alzheimer’s. This knowledge helps scientists look for early brain changes in participants and compare the effectiveness of treatments for people with different APOE profiles. Most researchers believe that APOE testing is useful for studying Alzheimer’s disease risk in large groups of people but not for determining any one person’s risk.

Scientists have long thought that genetic and environmental factors interact to influence a person’s biological makeup, including the predisposition to different diseases. More recently, they have discovered the biological mechanisms for those interactions. The expression of genes (when particular genes are “switched” on or off) can be affected—positively and negatively—by environmental factors at any time in life. These factors include exercise, diet, chemicals, or smoking, to which an individual may be exposed, even in the womb.

Epigenetics is an emerging science focused on how and when particular genes are turned on or off. Diet and exposure to chemicals in the environment, among other factors, can alter a cell’s DNA in ways that affect the activity of genes. That can make people more or less susceptible to developing a disease.

There is emerging evidence that epigenetic mechanisms contribute to Alzheimer’s disease. Epigenetic changes, whether protective, benign, or harmful, may help explain, for example, why one family member develops the disease and another does not. Scientists are learning more about Alzheimer’s-related epigenetics, with the hope of developing individualized treatments based on epigenetic markers and their function.

Discovering all that we can about the role of Alzheimer’s disease genetic risk and protective factors is an important area of research. Understanding more about the genetic basis of the disease will help researchers to:

Volunteers are critical to Alzheimer’s disease genetics research. The more genetic information that researchers can gather and analyze from individuals and families—both healthy volunteers and those who may be at risk—the more clues they will have for finding additional risk-factor genes.